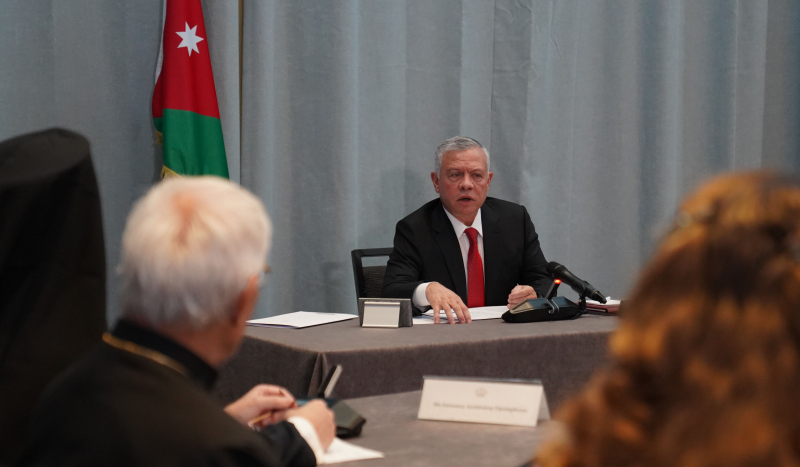 His Majesty King Abdullah on Monday warned against the continuous impediments facing Christians in the Palestinian Territories, especially in Jerusalem, adding that continued pressures could threaten their presence in the region.

At a meeting in New York with a number of Christian leaders in the United States, King Abdullah reaffirmed that Arab Christians are an integral part of the Middle East’s past and present, and are vital to its future, stressing the need to work collectively to safeguard the Christian presence in the region.

His Majesty said some church properties in the occupied territories were confiscated by extremist organisations, while other properties face high taxation.

The King reiterated that the Hashemite Custodianship of Islamic and Christian holy sites in Jerusalem is an honour and a responsibility that helps preserve the unity of all churches, and—more importantly—unity among the Muslim and Christian communities.

His Majesty pointed to the support provided for the Church of the Holy Sepulchre and other churches to preserve the status quo, highlighting Jordan’s renovation and restoration of Christ’s Tomb over several phases, as well as of the Chapel of the Ascension, located at the Mount of Olives.

The King reaffirmed Jordan’s commitment to the principles of interfaith harmony and dialogue, as well as moderation and openness, underscoring the promotion of peace and stability as pillars of Jordan’s foreign policy.

His Majesty highlighted the need to continue working towards political solutions to regional crises, foremost of which is the Palestinian-Israeli conflict.

The King said maintaining stability in Jerusalem and the holy sites is vital to relaunch peace efforts, stressing that the current situation, with the annual recurrence of tensions, is unsustainable.

For their part, the attendees expressed appreciation of His Majesty’s positions in defence of Islamic and Christian holy sites in Jerusalem, under the Hashemite Custodianship.

They lauded the King’s efforts to protect the Christian presence in the Middle East and defend the rights of Christians in the holy land, expressing readiness to support these efforts and commending Jordan’s role in working towards peace in the region.

The Christian leaders also highlighted the importance of the Baptism Site of Jesus Christ (Bethany beyond the Jordan), located on the East Bank of the Jordan River, stressing their support for the Kingdom’s efforts to develop it as a global destination for Christian pilgrimage, while ensuring its preservation as a UNESCO World Heritage Site.

They commended Jordan’s role in hosting refugees, noting that the Kingdom sets an example for other countries in dealing with the influx of refugees, and calling for continued international support for Jordan in this regard.

His Majesty also met with Archbishop Elpidophoros of the Greek Orthodox Archdiocese of America, and discussed means to support Jordan’s efforts to protect the Christian presence in the Middle East and safeguard holy sites in Jerusalem.